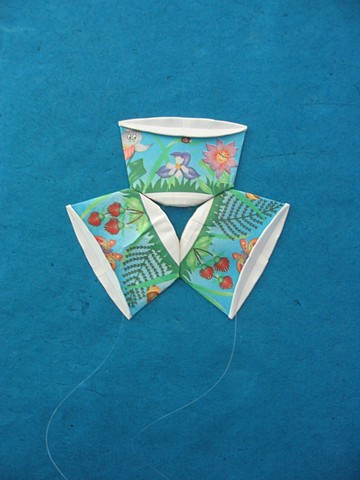 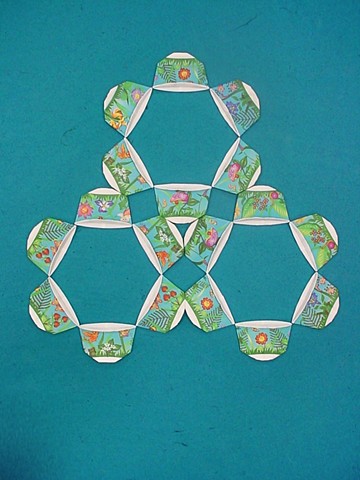 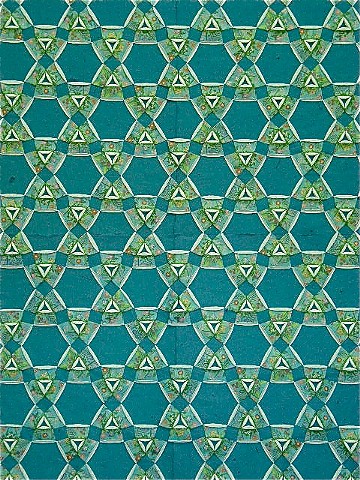 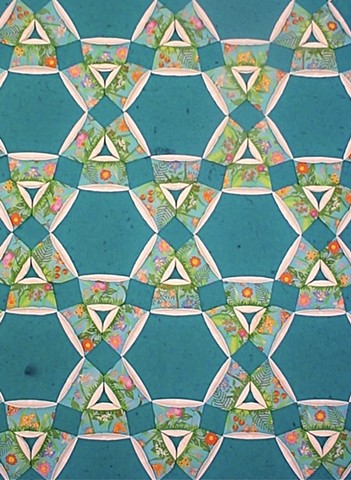 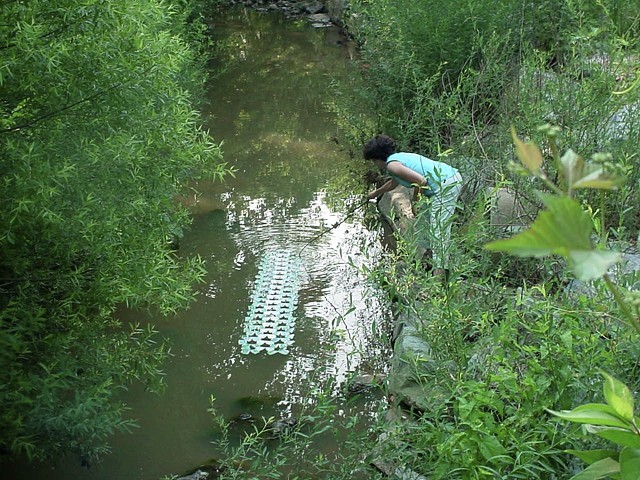 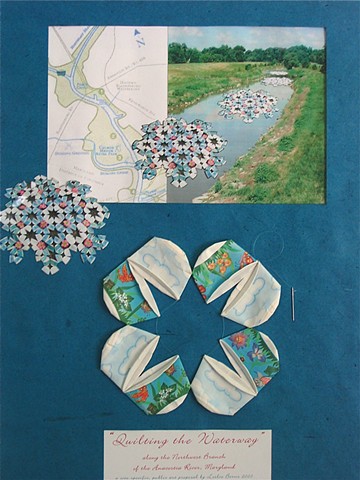 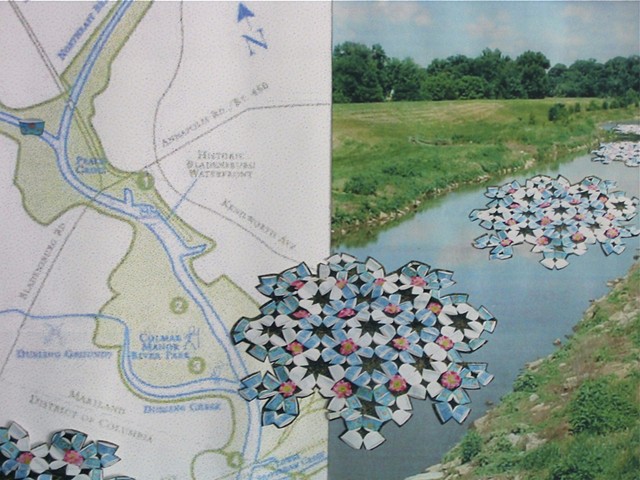 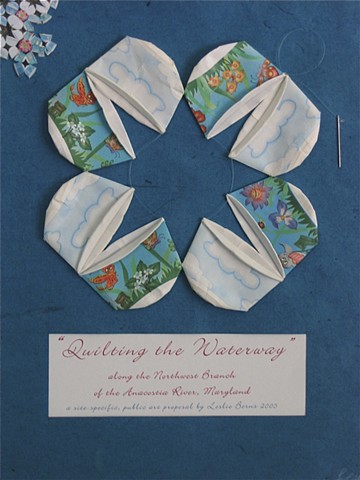 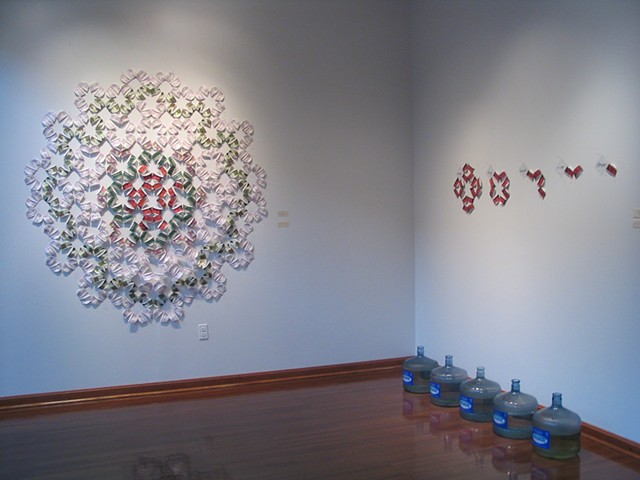 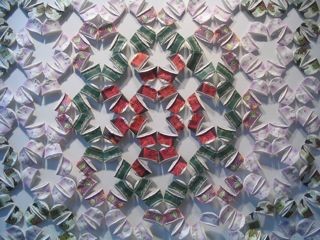 And the Ocean Showed that All was Connected (Queen Anne's Lace)
close up, I
folded paper dixie cups, monofilament thread, pins
approx. 67" diameter 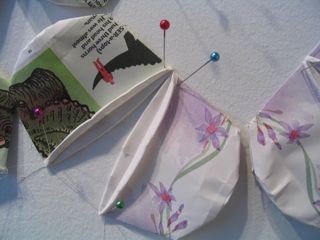 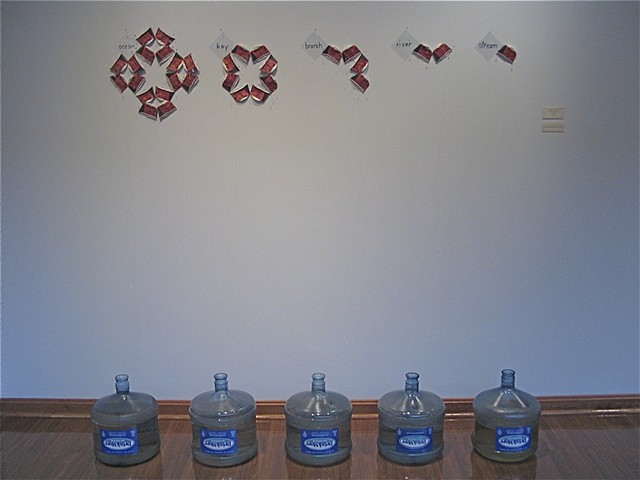 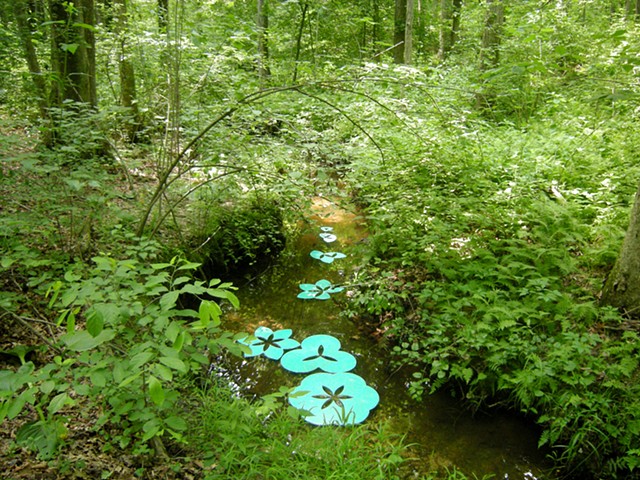 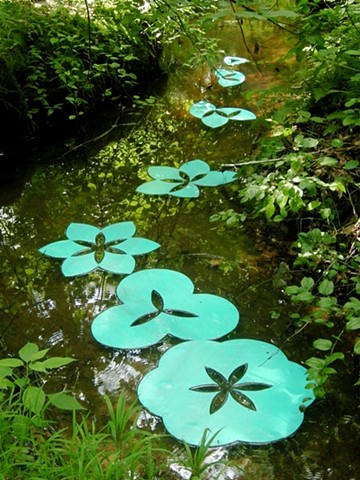 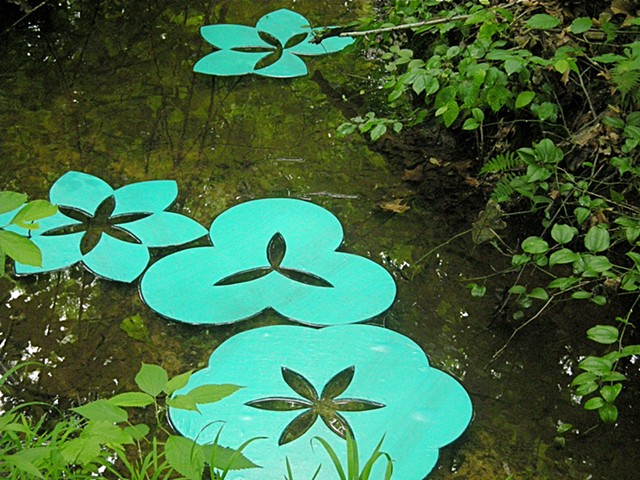 Quilting the Waterway first began when I happened to notice crushed 'Magic Garden' dixie cups strewn in the grass at my son's soccer game. I bought more of the colorful cups and started folding and arranging them. Folding cups became my version of knitting - handwork I could bring with me anywhere. I discovered that I could make amazing shapes and beautiful patterns with the cups.

I bought several sheets of deep turquoise-colored paper, handmade in India, onto which I glued my first 'cup collages'. Against the background of the cerulean blue-green, reminiscent of the Caribbean Sea, the negative shapes between the cups popped. As I began sewing cups together, the network of threads seemed to me a metaphor for the strong bonds between my mother, first-generation Jamaican-American, and her first cousins, women who have all exerted a strong maternal influence.

Not long after I picked up my first 'Magic Garden' cups from the grass, my daughter's math teacher sent home an article illustrating seventeen different types of symmetry mathematicians have identified in Oriental carpets. I began using the folded dixie cup as the motif to explore the many various symmetries.

Symmetry* became a vehicle for exploring the idea of multiplicity. The image of 'one within many' speaks to the impact of individual actions on collective consequences while calling to mind the 'butterfly effect'.

I conceived of the cup as an emblem of clean water representing "the life-generating and nurturing powers of the universe...symbolized by the ancient chalice or grail..."**. Everywhere I looked, my attention was drawn to water issues around the world and in my immediate environment.

Quilting the Waterway became a body of work that references handwork textile traditions historically done by women in private domestic space, work compatible, hence associated with care giving. I use this reference as a 'conceptual overlay'*** for creating works of art in public open space to raise ideas about community and connectivity between people, water and places.

* For more on the relationship between Dixie cup 'quilts', mathematics, and Stephen Pinker's ideas on "The Wrong Kind of Subject Matter", see an essay by Gary Kennedy, Professor of Mathematics, Ohio State University, pages 6-8: In the Realm of Forms cpbusw2.wpmucdn.com/u.osu.edu/dist/5/15…